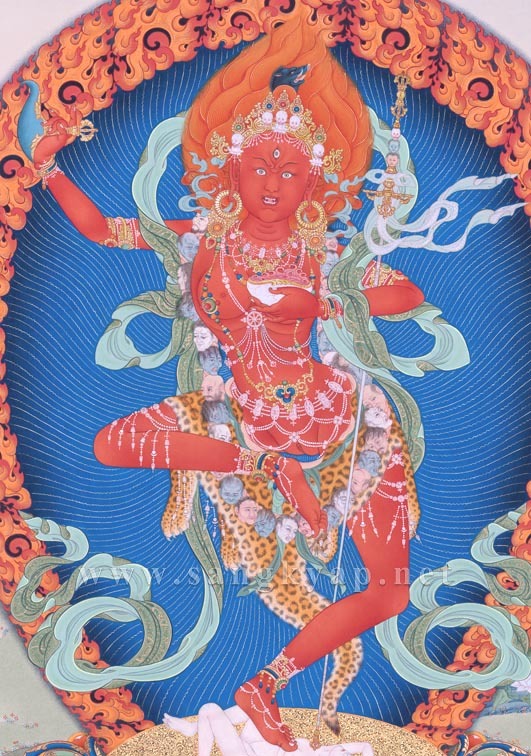 Join us for this special event, the Vajrayogini Empowerment, an initiation into the inner tantra practice of generation stage meditation ~ led by Drupon Rinchen Dorjee Rinpoche and Lama Pema Khandro.

This special weekend will feature two and a half days of instructions, empowerment and meditations of Vajrayogini. It will be led by Drupon Rinchen Dorjee Rinpoche who will give the empowerment and Lama Pema Khandro who will give the explanation and instructions.
We are honored to host the most excellent interpreter, Ina Bieler! The empowerment will be translated into lucid and easy to understand English.
This special event is offered online for the special occasion of the celebration of Saga Dawa and the one year anniversary of Dakini Mountain, a pilgrimage site for Vajrayogini in the Lake Tahoe National Forest of Northern California, founded by Pema Khandro.

Join us for the most auspicious time of year to do meditation, the month of Saga Dawa, celebrating the anniversary of the Buddha’s birth, enlightenment and passing away into parinirvana. This year’s Saga Dawa events, culminate in the special occasion of the Vajrayogini retreat, the celebration of the female tantric Buddha.

More About this Retreat
Vajrayogini is regarded as the essence of all buddhas, venerated by every sect of Tibetan Buddhism and venerated by Buddhists (and Hindus) all over the world. Vajrayogini is the symbol of the freedom and power of intrinsic wisdom and the enlightened feminine wisdom that severs suffering at its root. Vajrayogini is the female buddha who takes make forms, as a dancing Dakini, as a fierce warrior, as joyous, as wrathful, as compassionate mother, single or in embrace with consort. She is the symbol of the vibrant intrinsic power of altruistic love and radical clarity.

Vajrayogini practice is said to be ideal for those with strong passionate natures, as she represents the transformation of ordinary desire into joyous, altruistic enlightened intent. In the path of Buddhist tantra, rather than renouncing the mental afflictions, one harnesses, transforms and liberates them into the innate wisdom qualities. For Vajrayogini this focuses on the transformation of ordinary grasping and clinging, to supreme, altruistic love.

The Vajrayogini meditation is a generation stage meditation of Buddhist Tantra. It is the central method of Tibetan tantra. It centers on the transformation of our identity and a re-inhabiting of embodied experience in the energy of the yidam – the meditational deity. It is a practice used to liberate the mind from the confines of its habitual reference points.This is a profound method of meditation based on the Vajrayana view of the mind, that our identity may be open and aesthetically charged with the energies of the five wisdoms.

Generation stage meditations are closely kept secret practices passed through ritual initiations, known as empowerments. The empowerment provides an introduction to the practice, permission to practice, as well as the direct introduction with the energy of the yidam.

Practices will be led online by the teachers as well as practiced online as a group for the ritual practices and meditations. There will also be a break for community tea time and yoga led by group leaders at the Buddhist Studies Institute.

*Please note that the end times are approximate, class times may go over thirty to sixty minutes.

Optional yoga classes will also be offered, schedule will be announced.

This retreat will be offered on Zoom, an online platform for group gathering.
Participants will need a comfortable, quiet place to sit as well as a computer and internet access.

There is usually a lunch break each day from 12:30pm-1:30pm PST(UTC-7). As well as short tea break later in the afternoon.

Participants will receive link to join on completion of registration and admission is approved. Links will also be sent 24hrs and 1hr before the start time on Friday, and reminder links sent at the end of each lunch break.

Participants will receive texts to print by email before the date of the event.

Please email info@buddhiststudiesinstitute.org if you have any questions.

Pre-requisites: This event is open to the public. Generally in Vajrayana the generation stage practices such as Vajrayogini are accomplished 100,000 times. This type of practice is usually started after ngondro is completed because ngondro is the foundation of all meditations of Buddhist Tantra. Ngondro is a set of 4 meditation practices which are each accumulated 100,000 times each. Completion of full ngondro practice is not required to receive the Vajrayogini empowerment. Instead, Drupon Rinpoche very generously invites all our friends and members to attend but requests that students simply complete ngondro first before beginning their Vajrayogini accumulations. There are no other commitments required from this empowerment. It is given out of generosity of the instructors with wish that it will benefit you both as a blessing and as a practice.

Disclaimer: Note from Pema Khandro About Online Teachings
“Online retreats and teachings are a contested issue in Tibetan Buddhism when it comes to Vajrayana. Some people are staunchly against it, others favor it. This event is co-sponsored by the Buddhist Studies Institute, our project which is founded on the idea that online technology can transform the way that Buddhist teachings are offered to make them more accessible. This theory has been proved through ample evidence of our courses which have a diverse student body reflecting diverse racial, ethnic, social, economic, gender and gender orientations. Bodies that are differently abled have attended online programs when in-person events would be too difficult. Single mothers who are not able to leave their child alone for a weekend have attended. Participants in ten countries have attended, making connections across cultures. Therefore, the accessibility and potential of online programs has been demonstrated to make a positive impact.

I believe that the point of Buddhist teachings is to reduce suffering and promote peace and technology is a beautiful way to do that. The Buddha himself said that he would teach Buddhism in the language of every type of being. Technology is a new language, through which Buddhist training is being interpreted.

At the heart of the debate about online programs is the fascinating question of what makes ‘transmission’ possible. In Tibet, India and Nepal, I have attended many empowerments where thousands of people received the ‘transmission’ even though many hundreds were not even in the building. Due to oversized crowds, they sit outside and sometimes watch on screens. Yet these empowerments are considered to be authentic empowerments due to the intention and connection.  How is this different from or the same as watching on screen from home while a program is broadcast live??? Out of great caution and respect I have primarily reserved the online programs for our weekly Wednesday night Buddhist philosophy study classes, since this question of what constitutes transmission is such a serious and profound one. However there are certain urgent occasions, like this global pandemic, when so many other Lamas are giving empowerments online that I have judged it suitable to host an online empowerment by a guest Lama or give a reading transmission.

I reject an overly reductionist assessment of the issue in binary terms and instead simultaneously respect both beliefs as true: that Vajrayana should be taught online and that it should not be taught online, according to the particular teacher, lineage and circumstances of the students. This school will respect diversity in ways of expressing dharma, each approach will have their place. In Vajrayana Bodhichitta is the most important matter and an extension of authentic bodhichitta will be to respect the diverse approaches of others without casting shade.

Furthermore, I take comfort that all the teachings given in this program have, in recent times, been taught online by other important Lamas and teachers. I salute their bravery in paving the way and follow their example. I follow sentiments such as those by Garchen Rinpoche and Khenchen Tsultrim Lodro Rinpoche who have said that if the student has bodhichitta or a connection with the teacher then it can be just as powerful as in person. May Buddhism be an accessible resource to relieve suffering in all times to come and in all formats possible.”

Pema Khandro
Pema Khandro is an internationally renowned teacher and scholar of Buddhist philosophy. Ordained in the Nyingma lineage, enthroned as a tulku, and trained as an academic, her teachings celebrate the dynamic coalescence of tradition and the modern context. She is the founder of Ngakpa International and its three projects: The Buddhist Studies Institute, Dakini Mountain and the Yogic Medicine Institute. In her work as a Buddhist teacher she is an authorized Lama and lineage holder of the Nyingma and Kagyu traditions and was enthroned to carry on the lineage of her predecessor, the first Pema Khandro, an early twentieth century…
Learn more about Pema Khandro 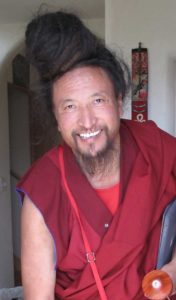 Drupon Rinchen Dorjee Rinpoche
Drupon Rinpoche received teachings on the Fivefold Path of Mahamudra and Kunsang Lama’s Words of Profound Instruction, Dzogchen’s Great Completion Parting from Samsara and Nirvana, Pointing Out the Nature of Mind, and other teachings from Tulku Nyendrak Gyaltsen Rinpoche. Rinpoche has also received Chakrasamvara according to Drilbupa, including the empowerment, scriptural transmission, and pith instructions from Tulku Thogme Rinpoche. Drupon Rinchen Dorjee joined the Drikung Kagyu Institute in 1993, and has received instruction in philosophy, Gongchig, Theckchen Tenying, Dhagpo Thargyan, and Uttaratantra from Khenchen Konchog Gyaltsen and other profound teachers of the Lineage. In 1995 Drupon received full ordination vows…
Learn more about Drupon Rinchen Dorjee Rinpoche